This post is an article that I wrote for Latvia Weekly, a site which seeks to provide regular English language news summaries of the most important stories in the country of Latvia. Latvia Weekly also provides English guides, like this one, which can inform English speakers on aspects of Latvian culture. The story was originally published October 6, 2018 here. This conference was an absolute amazing experience and networking opportunity. Not only did I meet some of the most esteemed international leaders in foreign policy but got to try my hand at both being a correspondent for Lativa Weekly and assisting the Baltic Security Strategy Project. These positions are ones that I will continue in throughout my year in Latvia.

I had the chance to attend the The Rīga Conference conference September 28-29, 2018 in Riga, Latvia. Here is an overview of the largest annual international security conference in the Baltics.

Ever since Latvia joined both the European Union and NATO in 2004 and the Eurozone in 2014, the country has taken an increased role in international politics and world relations. This growing position led to Latvia’s capital city, Riga, hosting the 19th NATO Summit in 2006. The event was the first NATO summit held on the territory of a former Soviet republic. Along with the NATO summit, Riga additionally held a high-profile conference on foreign security in 2006 entitled The Rīga Conference.

Convening in Riga ever since, the conference has become an internationally recognized annual event where regional and international experts in foreign policy and defense, academics, journalists, and business representatives come together in order to promote discussion over the issues affecting the transatlantic community. Over the course of the last several years, the gathering has been organized jointly by the Latvian Transatlantic Organization alongside the the Republic of Latvia’s Ministry of Defense and Ministry of Foreign Affairs. The 2018 conference was held September 28-29 at the National Library of Latvia.

The Rīga Conference has built its name and reputation within the international community in part because of its esteemed attendees and speakers. Conference highlights from the past have included the Prime Ministers of Latvia, Poland, Estonia, Lithuania, and Finland coming together to discuss economic growth in times of austerity, Georgian President Mikheil Saakashvili presenting in 2008, and the 2006 address by President of the United States, George W. Bush. 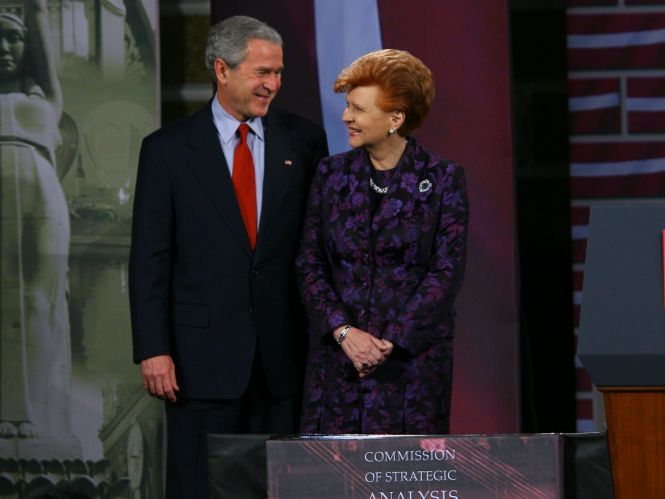 U.S. President George W. Bush with Latvian President Vaira Vīķe-Freiberga at the 2006 The Rīga Conference
Photo Credit: Embassy of the Republic of Latvia to the United States of America

The conference traditionally follows a signature format that allows free-flowing discussions that are accompanied by important keynote addresses from international senior leaders in policy.

This year, examples of topics that were considered at the conference’s plenary sessions included the EU’s role within rising geoeconomics; security challenges in the information age and amidst hybrid warfare; transatlantic relationships as a axis of global stability; and relations between Russia and the West. Some of the renowned speakers were current Latvian President Raimonds Vējonis, Retired U.S. Lt. General Frederick Benjamin Hodges III, Director of the German Council on Foreign Relations Dr. Daniela Schwarzer, New York Times Bureau Chief Steven J. Erlanger, and Latvian Minister of Defense Raimonds Bergmanis. 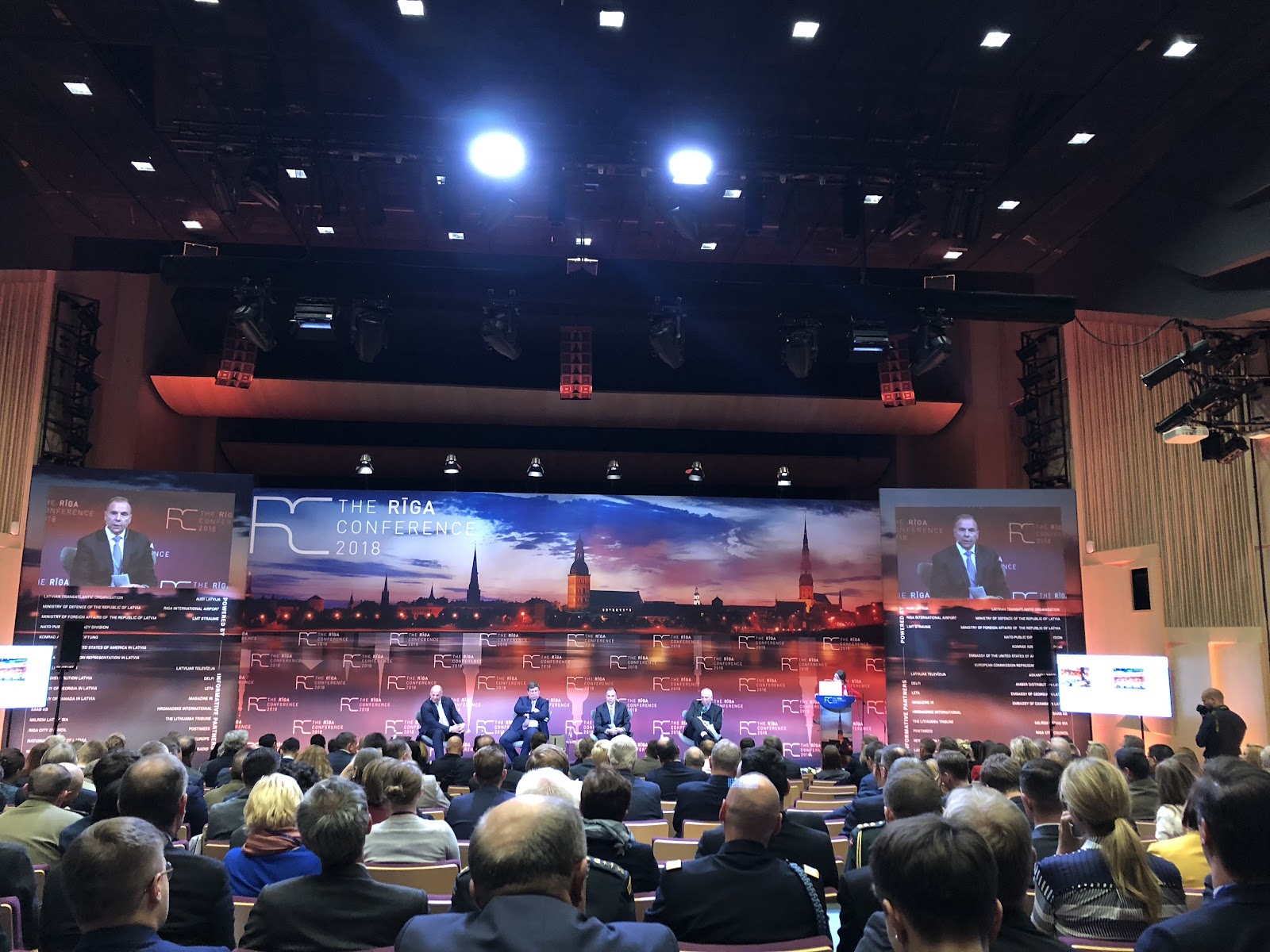 Besides large plenary sessions, the conference also included “night owl” sessions held under “Chatham House Rule” and break-out sessions that covered other topics of interest to the international community.

One such session focused on an overview of the Baltic Security Strategy Project. Currently the largest independent research project in the Baltic region, the Baltic Security Strategy Project has brought together over 90 international experts to assess and recommend policy suggestions on the subject of security in the region. Partners of the project include The Jamestown Foundation, The Baltic-American Freedom Foundation, The Latvian Political Science Association, The U.S. Embassy in Rīga, The Prague Security Studies Institute, and The Eastern European Studies Center in Vilnius. 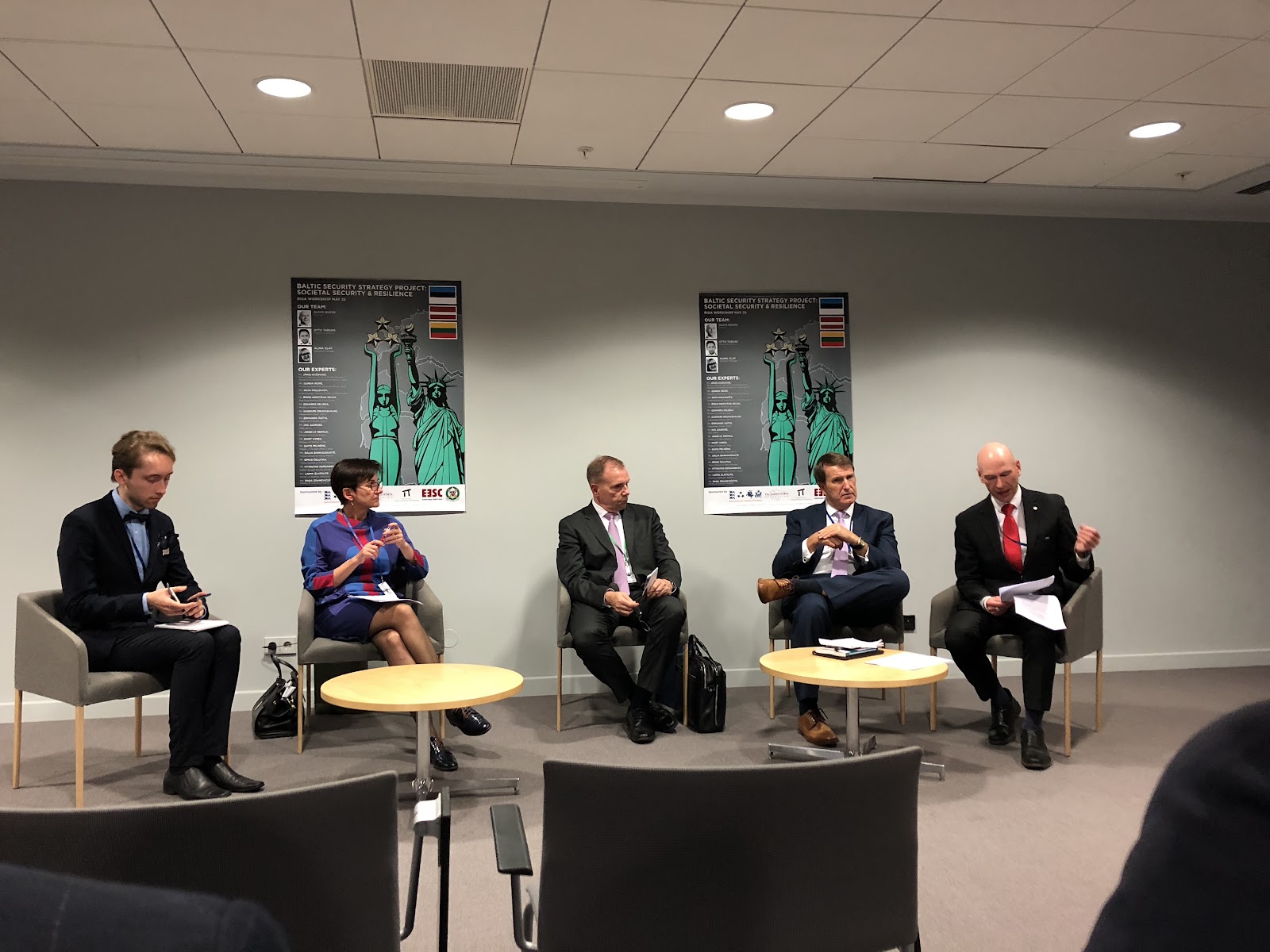 Their most recent findings, “Intra-regional Security Operation: What the Baltics Can Offer for Stronger Alliance,” were presented Friday and largely focused on cumulated research that surrounded the integrated strategy for developing security in the region. This integration includes both recommendations for conventional security measures, such as military defense, but also civilian security measures discussed through a variety of topics such as media, education, and culture. Nikers commented during the session, “It is [the Baltic countries’] vision to rise up to the level of much more integrated security and defenses.”

The project has also encouraged increased interaction between the Baltic countries through the development of shared intelligence and media channels in order to fully utilize their sovereignty. Nikers regarded that the countries should “perceive each other as colleagues, not competitors” as there is “huge potential in improving communication and building resilience to counter hybrid-information warfare.”

This theme of collaboration resounded throughout year’s conference. In order to ensure both national and international security, all the world’s countries need to work together and collaborate in the midst of uncertainty. Through education and dialogue, which was demonstrated through the quality discussion happening this past weekend at The Rīga Conference, international leaders can join together in promoting freedom and peace.

All in all, the conference was an event that provided deep contemplation for both the concerned world citizen as well as the foreign policy professional. Being at the conference provided many networking opportunities to meet renowned leaders from around Europe and the U.S., but also gave an inside look into the dialogue that countries engage in regarding national and international issues. Over the two dinners that the conference hosted Friday night at the Latvian Railway History Museum (next door to the National Library) and Saturday night at the House of Blackheads in the old city, I was pleasantly surprised at what genuine conversation occurred amongst attendees and speakers. Scholars, colleagues, ambassadors, and business executives came together one-on-one to engage in discourse about the work being done in small and large ways across many societies and communities. For example, I met two young professionals from the U.K. and the Netherlands who were engaging in such projects at their respective educational and government institutions. To know that there were others interested in the future of world dialogue was a refreshing and reassuring nod to a generation that is coming into their own regarding the area of security and defense. This was my biggest takeaway from The Rīga Conference, as it is always worth pursuing mutual understanding between those who make up our ever-changing and connected world. 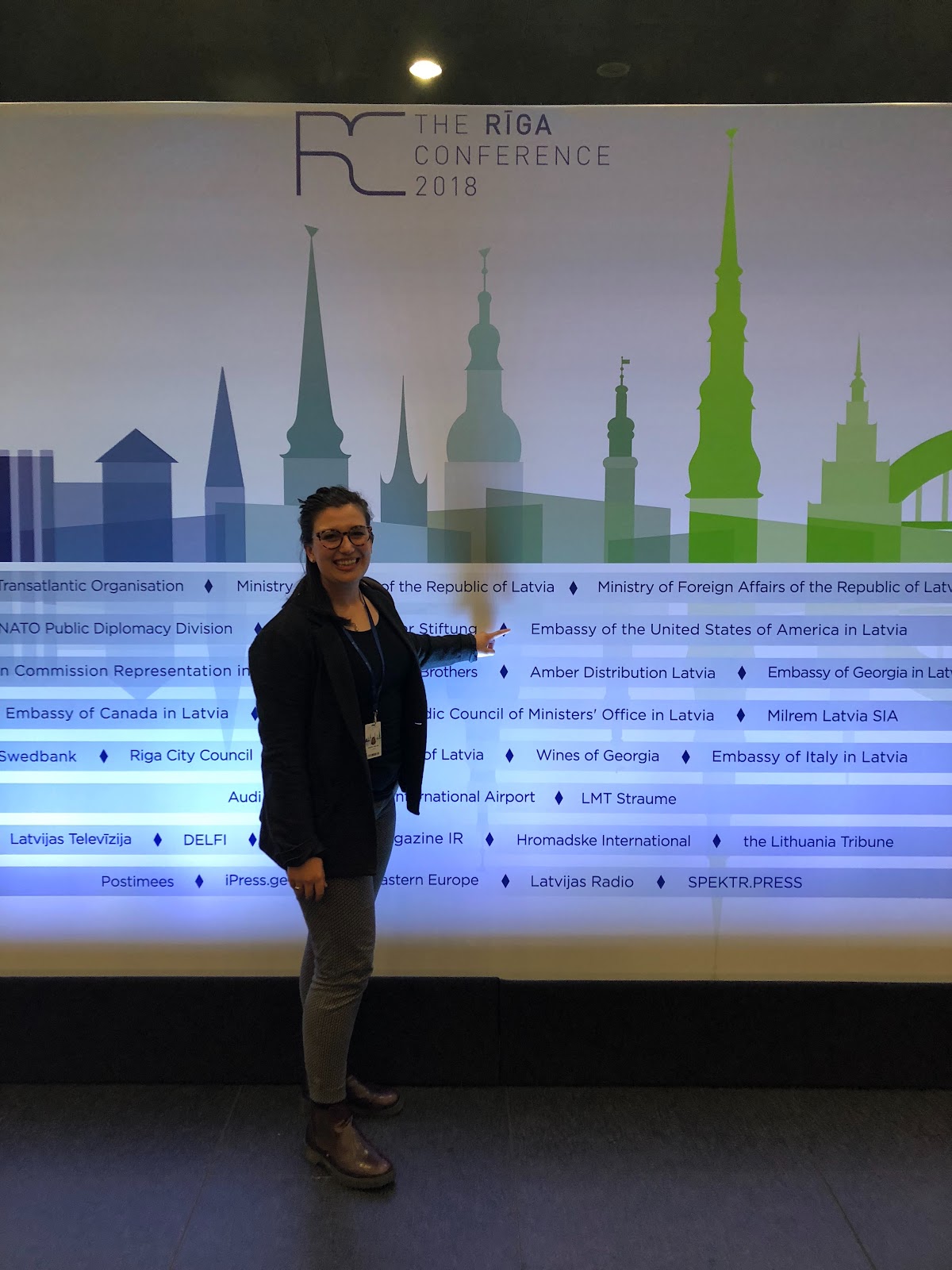 Kristen Carlson is a 2018 Fulbright Scholar from America who is living in Latvia and teaching at the Jāzeps Vītols Latvian Academy of Music and Riga Teika Secondary School for one year, and is Latvia Weekly’s Rīga correspondent.